Project Title: Afrogermanic? Racial Difference and Cultural Exchange in the Aesthetic Products of the Early Techno Scenes in Detroit and Berlin

Since the 1990s, Berlin has become a global electronic music hub and its techno clubs attract thousands of visitors annually. The origins of techno music, though, are in a more unexpected place: the Detroit suburb of Belleville, Michigan, in the early 1980s.

Techno music grew out of young Black Detroiters’ confrontation with their racially segregated society, as a way of imagining Black technological utopias, but the music has become highly racialised in Germany. Many early white techno enthusiasts in Germany were fascinated by the music’s African American origins. Yet their fascination often projected Blackness onto the US and reinforced an image that the German music scene was primarily white. Many Germans of colour, meanwhile, expressed discomfort with German techno’s unacknowledged privileging of whiteness.

Magazines, flyers, photographs and poems from the late 1980s and early 1990s help us construct a less divided picture. I have been gathering these ephemeral sources from archives in Detroit and Berlin and am writing two articles from what I have found.

In one, I’m analysing poetry by Black German writers from 1990s magazines and pamphlets. Techno did not enter a cultural vacuum in Germany. Black poets were among the first to engage with how techno fit into existing discussions of race in German electronic music and club culture.

My second article reflects on how attitudes to race influence the story of techno itself. Archives in Berlin and Detroit are preserving documents and art from the club scene, while scholars and museums are writing its history. As historical consensus develops, artistic sources from the archives can help us access a more diverse range of perspectives, instead of relying on generalisations or master narratives.

You can also hear my discussion of techno and the fall of the Berlin Wall on the BBC’s Arts and Ideas podcast, or read my feature in History Today 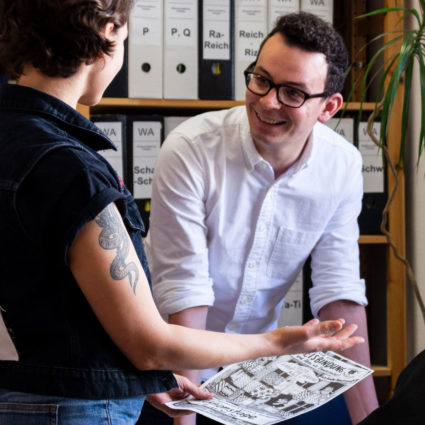