The Carnegie Trust for the Universities of Scotland was funded in 1901 with a gift of US $10 million from Andrew Carnegie.

The sum was then unprecedented, yielding over £100,000 per year at a time when the total government assistance to the four Scottish universities in existence was only about £50,000 a year.

Andrew Carnegie expressed his intentions for creating the Trust through a Trust Deed, signed on 7 June 1901. Carnegie was first drawn to the subject of Scottish universities by an article entitled “The educational peace of Scotland” published in literary magazine The Nineteenth Century in 1897. The article advanced the idea of abolishing tuition fees to ensure poverty was no barrier to higher education. Following consultations with individuals who would later become the first Trustees of the Carnegie Trust, the idea of a Scottish charitable organisation in aid of students expanded to encompass broad support for the universities in both their teaching and research activities.

In the resulting Trust Deed, Andrew Carnegie defined the purpose of the Trust as being for:

the improvement and expansion of the universities of Scotland and to enable university attendance by the deserving and qualified youth of that country to whom the payment of fees might act as a barrier.

In addition, the Trust Deed and accompanying letter to the Earl of Elgin made provisions for the Trust to receive donations, in contrast to his other charitable Trusts:

This will enable such students as prefer to do so to consider the payments made on their account as advances which they resolve to repay if ever in a position to do so, and that this will protect and foster the spirit of manly independence so dear to the Scot.

Despite Carnegie’s generous intentions, the foundation of the Trust was not received with universal enthusiasm in the early days. The magnitude of the $10 million benefaction and its yield in income far outstripped the resource base of the Universities of that time. Questions arose, therefore, of a possible threat to University independence and doubts were expressed, fearing that tuition support would somehow weaken the independence of individual students.

The impact of Carnegie’s bequest was huge – there was no other such schemes in support of university tuition fees on this scale in Scotland, nor in the rest of the world.

By 1910, the Trust was covering the costs of tuition fees for half the student body of the universities of Aberdeen, Edinburgh, Glasgow and St Andrews.

During the first half of the 20th century, the Trust funded a very broad range of activities in addition to tuition, including the construction of lecture theatres, buildings, university libraries and student residences. The Trust also provided funds for the endowment of Chairs and Lectureships, and created Research Fellowships, Scholarships and awarded research and publication grants.

With the availability of public funding for tuition fees steadily increasing in the second half of the twentieth century, the Trust focuses now on funding for academic research both at doctoral and postdoctoral level. Our resources are far more limited today than they were in the early years of the Trust. Our investments generate an annual income of approximately £3 million pounds, 85% of which supports our various funding schemes. 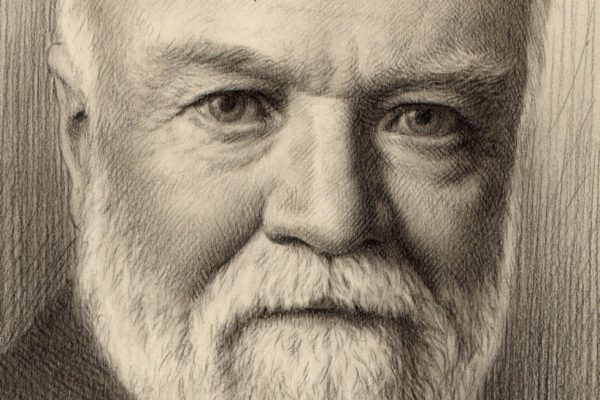 As well as a philanthropist, Andrew Carnegie was an industrialist, author, and business magnate. Born in Dunfermline in 1835, to a poor family, Andrew Carnegie went on to become the wealthiest man in the world during his lifetime.

Read More about Our Founder

The Trust holds over 100,000 index cards recording awards made…

The Annual Trustees' Report, required for compliance with the Charities…

Donations and legacies from former beneficiaries, grant recipients or other…